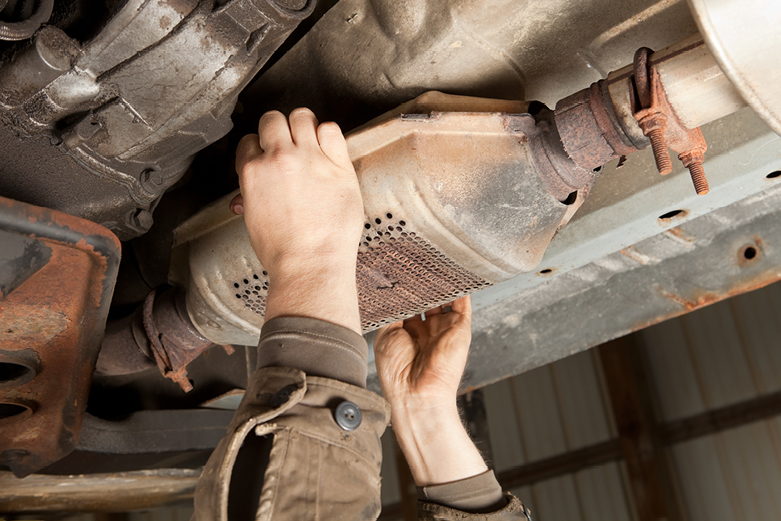 Recently, there has been an increase in the frequency of catalytic converter thefts nationwide. GuideOne is experiencing an uptick in claims as well. On average, the repair cost from this type of theft is about $1,500. However, this cost does not include your deductible, which can be anywhere between $250 to $1,000.

What Makes a Catalytic Converter So Valuable?

Thieves are targeting these devices, which are located under vehicles, because they contain precious metals that are valuable to scrap metal dealers — and because they’re easily accessible and lack identifying markings.

Specifically, there are three types of metals that help the catalytic converter remove toxins from vehicles’ emissions: platinum, palladium and rhodium. There’s only a tiny amount of each metal inside each converter, but a little goes a long way. The prices of these already-valuable metals have quickly increased by hundreds of dollars an ounce in recent years.

Scrap metal dealers will pay close to $100 for the typical catalytic converter. However, the metals found in some exotic and foreign car models can fetch more money, even up to $400.

What Tools Do Thieves Use?

Stealing a catalytic converter takes either a wrench or a cordless reciprocating saw. In some cases, thieves use mechanics’ dollies to slide under vehicles more easily.

How Long Does It Take to Steal One?

About three minutes. That is to either unbolt it, or use the reciprocating saw to cut it out. Experienced thieves are even faster.

How Do Catalytic Converter Thieves Work?

The occasional or “opportunity” catalytic converter thieves go prowling and look for easy steals. Busses, vans and SUVs are common targets for theft because the higher clearance allows for easier access to the exhaust system, including the catalytic converter. Some thieves drive vans, because they offer some concealment when parked next to the vehicle(s) they’re targeting. The vast majority of the claims reported to GuideOne have involved thefts from isolated vehicles (busses and vans) that are found in the parking lots of many schools, nonprofits and religious organizations.

The more organized catalytic converter thieves look for larger scores. They attack the parking lots at auto repair shops, auto fleet parking locations and the poorly attended parking lots of businesses or organizations where several vehicles are parked overnight. They are better equipped, faster and work as teams to make larger scores.

How Can I Deter Catalytic Converter Theft?

Fortunately, there are several things your organization can do to help minimize the chance of having catalytic converters stolen from your vehicles.

If you have a garage available, always park the vehicles inside and keep the garage door shut and locked. When parking away from your facility, park your vehicle in an area that’s highly visible to other people — near a building window, near security cameras or under lights after dark. When parking in your lot, make sure that the same security considerations are followed. The riskiest places to leave your vehicles are the places where vehicles are left long-term, such as auto repair shops, and parking lots with closely parked cars that allow organized thieves to hit several cars at once.

Lighting is vital to reducing catalytic converter theft. Though some thieves are bold enough to strike in busy areas in broad daylight, more organized thieves won’t be so brazen. Good security lighting makes your vehicles a less opportune target.

For some organizations, you may consider installing surveillance cameras that can monitor fleet vehicles. However, for security cameras to be effective, the video must be high quality and able to identify small details such as vehicle types and vehicle license plates. They should also be able to identify the thieves.

The less organized thieves fall into quickly recognizable patterns in local areas. Monitor your local news to get a better idea of when there are active catalytic converter thieves in your area.

Protective coverings for your catalytic converter, such as the device known as the “Cat Strap” or “Cat Clamp” can deter thieves as well. These protective devices surround the potential cutting area of your catalytic converter with hardened-steel products that make it much more difficult for thieves with reciprocating saws to steal your converter. When thieves encounter these types of devices, they will most likely move on to another less-protected vehicle.

Convicting a thief of their crime is difficult if they are not caught in the act of stealing. Police need proof that a catalytic converter was stolen. By etching your converter with your vehicle’s VIN number or your driver’s license number, police can track your converter back to you if they recover it after it’s been stolen. This may not protect you from theft, but it could help to catch the thieves and prevent future losses.

Security fencing around parked vehicles can provide some deterrent to thefts, but because bold criminals commonly cut fencing to get at multiple vehicles found in secured areas, this method works best when combined with other safety measures.

© 2021 The GuideOne Center for Risk Management, LLC. All rights reserved.This material is for informational purposes only. It is not intended to give specific legal or risk management advice, nor are any suggested checklists or action plans intended to include or address all possible risk management exposures or solutions. You are encouraged to retain your own expert consultants and legal advisors in order to develop a risk management plan specific to your own activities.